Lorna and I ran a session at the CETIS conference on the topic of Open Practice and OER Sustainability, we had 10-minute presentations from ten brilliant people who have been involved in the UKOER programme each giving a view from their own perspective on the general problem of “what now that the Jisc money has gone?” It’s fruitless to try to summarise that in full, so what I will do is add links to presentations to the session page linked-to above and give my own very cursory summary of a few of the themes. Lorna has also written a summary on her own blog.

“Scratch your own itch”

One of the most telling comments on sustainability, from Julian Tenney talking about the Xerte project, was that a project would most likely be sustainable if it was about doing something that the people involved needed doing anyway. Not necessarily something that would be done anyway (though in Xerte’s case mostly it was), but definitely not something that was being done just because the money was there. I agree with a comment that was made that there is a problem with the way that Universities treat project funding in this respect (at least in research departments), always the emphasis is on chasing money, getting the next grant. There were many examples of what it might be that “needs doing anyway”, at personal, subject community, institutional, and national/sector-wide level, from the sharing of resources between humanities teachers using HumBox, extra mural studies of the Department of continuing Education at Oxford University, the institutional teaching and learning policy at Leeds Met University, FE colleges in Scotland working in ever closer union and student progression from College to University. 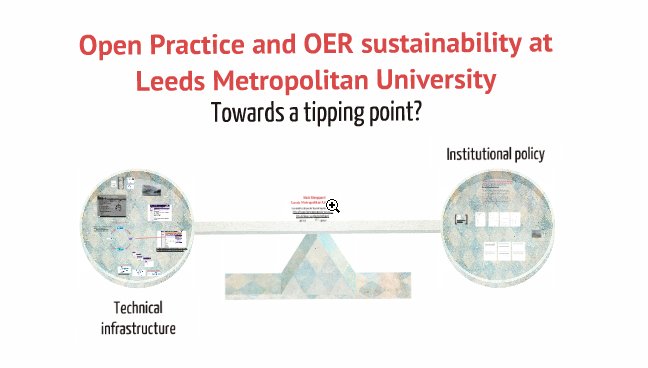 Nick Sheppard asked for a technical infrastructure to support these institutional and other policies. He (and others) asked for APIs and other links between repositories (and the rest of the web, I assume) so that the greatest advantage could be had for effort. Sarah Currier told us about the new offers from Mimas to make your OER effort “Jorum Powered” through a hosted repository, a web interface into Jorum, or by building custom applications using the new Jorum API.

But with technical infrastructure come technical requirements, David Kernohan was worried that these requirements are only bearable by an academic with help, and that once the Jisc funding goes that support will also go. Suzanne Hardy also touched on this. 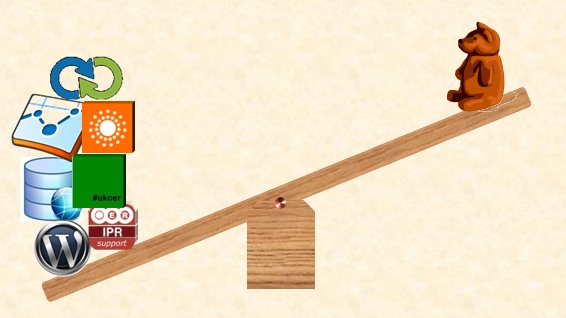 by David Kernohan, Jisc. The teddy bear is an academic.

The concept involved here was identified by Yvonne Howard as relative advantage, the advantage of something has to be compared to the costs and the costs have to be minimised, as can be done through clever technology such as maximum use of machine created metadata.

So far I’ve mentioned advantages for many people but glossed over the fact that different people will see different advantages; they don’t and for that reason they will pursue different directions, as we have seen with MOOCs. Amber Thomas of Warwick University (but yes, the same Amber as was of JISC) described MOOCs and OERs as distant cousins who used to get on but are now no longer friendly for some reason. And it’s not like the O for Open in the two really stands for the same thing, as Pat Lockley said, their open is not necessarily our open. But, he asked, what is open? a footpath through private land or a National Park with the right to roam where you please (if you can manage to get there)?

(this last photo is mine and is covered by the CC-BY licence of this blog; the others aren’t and are used according to their various licences or permissions from their creators.)

2 thoughts on “Brief reflections on Open Practice and OER Sustainability”