The educational alignment property and the associated alignment object that LRMI introduced into schema.org have been described as the “killer feature” for LRMI. However, I know from the number of questions asked about the alignment object and from examples I have seen of it being used wrongly that it is not the easiest construct to understand.

Perhaps the problems come from the nature of the alignment object as a conceptual abstraction, so maybe it will be help to show some concrete examples of how it may be used. However, bear in mind that the abstraction was a deliberate design decision made so that the alignment object should be more widely applicable than the examples given here. So I will first discuss a little about why some simpler more direct approaches were considered and rejected (as were some approaches that would be even more abstract).

The general use case for which the alignment object was introduced to meet was , in brief,

“help people find resources that can be useful in teaching or learning in some specific scenario.”

That looks deceptively simple. The complications come when defining the “specific scenario” and unpacking the word “useful”.

“Educational framework” is a deliberately broad concept as we wanted LRMI to be applicable globally and across many levels and modes of education. Some specific examples are school-level curricula or attainment standards such as:

Perhaps more relevant to higher education many professional bodies define the competencies required to become a member of their  profession, for example:

As well as having a role in  defining competences and outcomes, measures of academic level or difficulty may be useful independently as reference points, for example:

One the other hand you may just want to specify the subject being taught, or the educational discipline for which is it being taught. Various classifcation schemes for academic subjects are available, for example:

All of these frameworks (and many others) may be used to describe aspects of an educational scenario.

ways of being useful

Life isn’t simple enough for us to meet the use case described above by adding a single property to schema.org Creative Works to say that the resource “aligns with” (i.e. is useful in the context defined by) some entry or node in an educational framework.  In prescribing a “useful” resource we would want to distinguish between resources that teach and asses a topic; we also want a resource that assumes suitable previous knowledge, or requires some specific reading level, or assumes a certain general academic level. There may be other forms of alignment. There isn’t agreement on a minimum core set of properties required to address that word “useful” in the use case, but there is agreement that a resource can “align” with an “educational framework” in several ways, some of which we can enumerate. Hence the birth of the alignment property and abstract Educational Alignment object.

We start with a Creative work:

and an educational framework:

(Note, there is no schema.org class of type EducationalFramework, but we assume that we can refer to some of the following properties pertaining to it: some text that identifies the framework as whole (let’s call it a name), and the URLs, names and/or descriptions of nodes within the framework.) 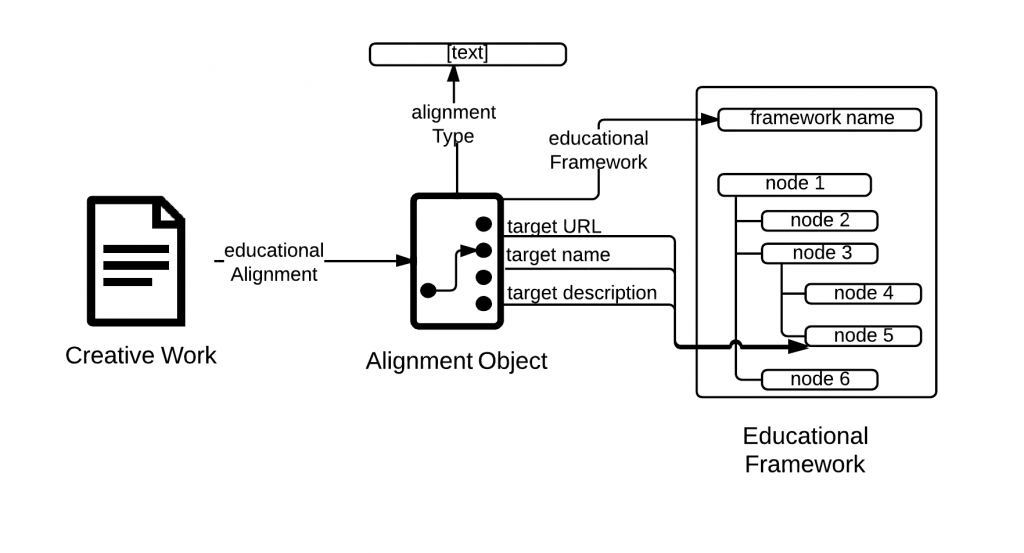 I have seen both of these mistakes in actual markup of webpages.

1. the alignment object on its own is fairly meaningless. Unless it is referenced by the educational Alignment property of a creative work it’s as useful as half a link.

2. since the alignment object is a proper schema.org Thing (to be specific a subtype of an Intangible Thing) it inherits the properties that every schema.org Thing has. e.g. a name, a URL, a description an image. Some of these make some sense in some cases (see below) but importantly, none of them are used in expressing the alignment: the url of an alignment object is not the same as the url of the creative work or the node to which it aligns.

I would like to use two real-world examples of where services provide information that can be seen as an assertion that a resource is useful in connection with (i.e. aligns with) an educational framework:

1. Kritikos, where students can tell other students what is useful for their course.

Kritikos is a custom search engine for visual media relevant to teaching and learning engineering.  In part the customisation comes through the use of a Google CSE,  but more relevant to this post is the part that comes through allowing users to classify whether resources found on it are useful for specific courses [aside: this part of the kritikos service is built on a Learning Registry node].

The example shown here is the kritikos information page for a video of a lecture from MIT Open CourseWare. It includes “what others are saying about this resource” with the information from a year 3 MEng Aerospace Engineering student that it is relevant to “Flight Dynamics and Control”. The link from this assertion leads to other resources deemed useful by users for that module. “Flight Dynamics and Control” is a module at the University of Liverpool (code AERO317) that exists within the framework of Liverpool’s Aerospace Engineering programme. It is worth noting that kritikos can also be used to record when a resource is not relevant to a course–this is useful for weeding out false positives that get through the Google custom search engine. [Disclosure/bragging: I had an advisory role in the project that lead to kritikos.]

So, there’s an expression of an educational alignment; how does it relate to the alignment object?

The creative work in question is the MIT lecture (to be precise it’s a http://schema.org/VideoObject), we could describe a few of its characteristics with schema.org properties:
name = “Lec 7 | MIT 16.885J Aircraft Systems Engineering, Fall 2005”
url=http://www.youtube.com/watch?v=2QRfkG7jOfY
duration = PT110M22S
I’m not guessing this, the YouTube page has Schema.org microdata in it.

The node in the educational framework is a bit less well defined, but we would be justified in calling the module description a node in a framework called “University of Liverpool Modules” and saying the name for this node is “AERO317”, its description is “Flight Dynamics and Control”. It has a page on the web which gives us a url, http://tulip.liv.ac.uk/mods/vital/vital_AERO317_200809.htm. So we can express the alignment:

What about the other properties of the AlignmentObject, the ones it inherited by virtue of being an official Intangible Thing in the schema.org hierarchy? Well you could envisage the image property pointing to the screenshot above, and the url property being a url with a fragment identifier that points to the “what others are saying” part of the kritikos page. Sure, you can give it a name and descriptions if you want to. Maybe these aren’t especially useful, but the point it that they are clearly different from the url, name and description of the University of Liverpool course to which the MITOCW video aligns.

I’ll cover this in less detail. The main problem with the example above is that the educational framework, while locally useful, is somewhat ad hoc we had to kind of look at the course structure at Liverpool University in a certain way to see it as an educational framework. Better examples of a more widely shared and more formally constructed educational frameworks are those of the US Common Core State Standards Initiative.  OER Commons is a repository and search engine for Open Educational Resources that expresses alignment to these frameworks in its descriptions. 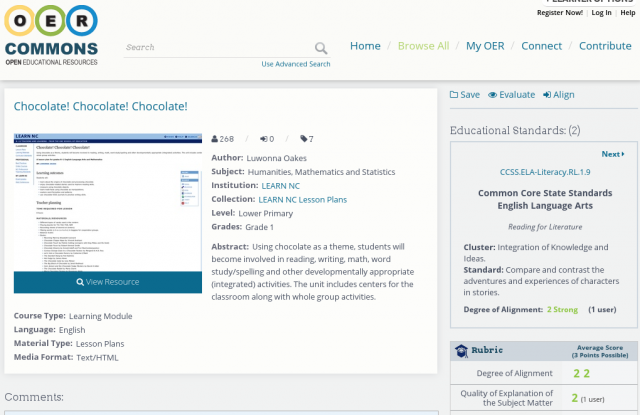 Screenshot from a resource description on OERCommons showing educational alignment information on the right.

The screenshot on the left shows such an alignment being displayed (the image links to the actual page in question, which is more legible). You see that in this case the creative work called “Chocolate Chocolate Chocolate” aligns with the Common Core Standard “CCSS.ELA-Literacy.RL.1.9 : Compare and contrast the adventures and experiences of characters in stories.”

Interestingly there is some other information given about the “degree of alignment”, i.e. how good a match that resource is to teaching that State Standard.

justification for the abstraction of the alignment object

In part the motivation for creating an alignment object class in schema.org was the issue mentioned above  about not knowing what might be all the possible forms of alignment between a resource and an educational framework used to characterise some aspect of a teaching and learning scenario. However I hope the examples above go someway to showing that alignments are real (if intangible) things, you can give them URLs, and names if you want. Furthermore they do have properties. For example, they are asserted by someone: a student at Liverpool University in the kritikos example and a user of OER Commons in the other. In the OER Commons example there is other information about the degree of alignment. This goes some way to convincing me that the alignment object isn’t just some computer science trick of indirection.